Good morning. It is us and it is prior to work hours yet, so we figured we’d slip in a little blogging. We’ve taken our shower and medicine, though it’s about 7 A.M. and we are not dressed yet. This would be our regular time … so maybe we ought to try that? Ok, we’re dressed too and we went to talk to Rich for a while, but he said we were just staring at him. Maybe we were waiting for some kind of conversation, but he was between things. So really didn’t want to go with him there. So we’re back again. Wallah!

The only other thing we’ve really done is to check the emails and talk to Linda in a note. We ordered her “stuff” yesterday. We had a small wager on the Bears Packers game for divisional title. They obviously won, which meant I didn’t get my needles and I owed Linda some pins. Well, no we are not major gamblers, but it was in good spirit of the game. There is still something rewarding in getting even small packages in the mail. :)

Ahh and speaking of packages – we got ours in the mail yesterday – the big ones from JoAnn’s. We are testing out the hand and elbow pads and stretches’. The following two are a couple of the items in. 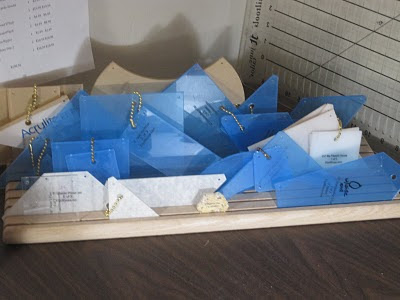 The blue and white and see through plastics are guides for sewing different size quilt pieces. This wasn’t new but it is new to be displaying them – we just got the wooden slotted board. It seems just the right size. The guides themselves are CS’. They were hidden away in a basket, so I thought that we’d have better use of them if we put them out, plus I figured it is an interesting display. I like it as part of the sewing décor. There seems to be some give in that corner. I might move it if I were working on a big quilt, but for now it seems fine the way it is.

There is a matching type frame on the other corner of this set of tables for the measuring guides. Just a cool cool thing.

The next really neat thing we got in was the new design wall – the design wall slips in front of the closet to make double use of the space … who woulda thought! 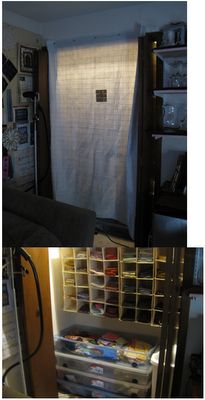 The interesting thing about this design wall is that it is for checking out different quilting ideas prior to sewing. The back lit light is perfect in this situation. I couldn’t have been happier with the set-up than if I’d created it myself. It’s got a couple metal holes at the top so easily fits over a small 1 ½” nail. I can make it a little bigger in front of the doors too, but for now the edges are folded back to fit primarily the open door space. I like that it has the squares coming from the back to align the cut fabric, and how light it is and that it has felt-like material on the front that grabs fabric and holds it in place without pins. We just put on a little 3x3” set of squares to give you an idea.

Very economical, efficient AND effective! I don’t think you could squeeze much more value into that corner :) If we weren’t using it at the time, we could just roll or fold it up. PERFECT!

We got a small drawer filled with little stuff that I think we talked about a couple days ago, but then there were two other main items. We got the floor lamps and we put them together last night. 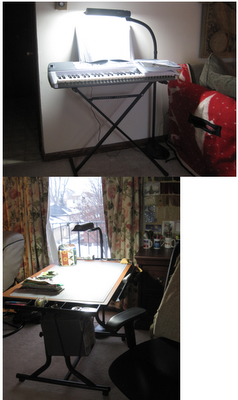 Cool-cool?!! It’s funny, but I didn’t notice it until now … both the underneath part of the drafting table and the piano keyboard are black metal as well as all four lights in the room. We were aware we were matching the appearance of the lights as to the basic design, but I hadn’t realized how well it matched the stands of the other two pieces. Guess it just makes sense and because they are Ott lights, they are perfect as to illumination. We left Rich last night and he was sitting at the table reading under one. Wow! That just doesn’t happen every night. I love it when he likes something we’ve gotten for the house. They do their job and it’s very easy to see over the drafting table light to be talking to Rich or watching TV.

This is the light by my couch space … or should I say kitty’s? Well it used to be my space. 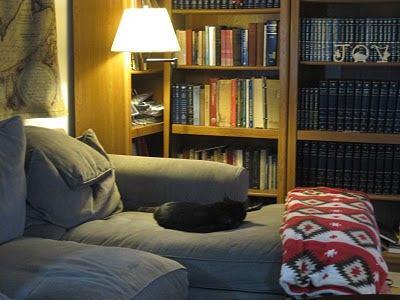 All is well that ends well. As it turns out … the kitties match the lights too. Who woulda figured they are all like regular fixtures Hehehe.

Sorry, that’s all the pictures you get for the morning. We do have to be getting on with things, you know? Well not exactly this moment, but soon. We did find ourselves playing the piano and were doing so when Rich got in. We worked our way through him making dinner without ANY complaining. It seemed to have been a good time to be playing. We found three or four songs that we played quite a while.

There is so much to learn in playing even at this totally low level. I don’t pretend to be smooth getting out the cords, but sometimes it’s good enough people can tell what we’re playing … I think that’s the general effect we’re going for.

Yesterday was a good work day for us. We had the work computer on for quite a while and because we stopped for a half hour to get the mail we worked about 45 minutes past the 4 P.M. hour. I wish we could be getting to a lot more clients than we did, but it was steady and productive work – just 17% complete though.

We’re going to see if we can’t take that up to at least 50% today. We know more of what we are doing so there is that hope.

Last night we had dinner after the piano and we watched TV with Rich. We almost got back to sewing … we had actually picked out the squares for the new roll and started sewing them, but then Rich seemed to be a little more needy. He said that he would give us a message so we scrapped the night as to sewing and cutting.

Maybe Linda made more progress than we did. It’s like rooting for the home team.

Well, if not one, maybe the other did it. It’s a good thing to be doing … that is for sure. Makes us QUILTERS!

You just gotta know with all the improvements we want to be doing what we do.

Hmm, one other thing – Rich brought the taxes over to the accountants. Rich didn’t get much info back from her, but in general we’ve noticed that Kathleen the daughter will email us when she has something for us, so we’ll wait for that - maybe patiently, maybe not. I don’t know what kind of a backlog they might have.

There were a lot of paper piles on their file system. Please, please let’s hope for a good tax return this year!

There … we just got some coffee and we made some eggs. They will be ready for both Rich and us in about 10 minutes. He’s on the phone talking to his daughter now.

We also made some fresh coffee. This next batch will be good for the next four hours. About then we switch over to water and pop. We’re a little on Rich’s case because he keeps forgetting to bring home ice and it’s been on his list. Then he reminds me that I have a car and it would be good for me to go out too. Well that kind of quiets us down. Hmpf!

Maybe that’s about it for now. We’re going to post and then get busy with the day. It be a working day!
Posted by Ann Marie at 8:27 AM