Having such a good life, but so much is happening and left to do!

Good morning. This is me. We don’t have a lot of time because today is a working day, but we thought we are really behind in our writing and should at least try to catch up a smidge. It has been a full week since we’ve written. The last time was a Monday before yesterday. We were so far behind that we forgot our son’s birthday which was on Sunday. Just a lot of stuff going on – but, for now today is a Tuesday and we’re going to work hard to stay on track throughout the day.

Yesterday we did pretty well at work. We got done with only half of what we’d wanted, but the fact of the matter is that we are still working and that’s the most important part. We’d like to make it like that today too.

We had gotten behind the gun last week and should have been able to catch up, but we didn’t. We were putting a lot of time into working, and then there were snow days and so some of that time was used up in sewing projects … I think. Maybe I could check that out? Here we’ll do an outline…

1. Still worrying about not having a house

2. Still handling that my sister have two houses – competitive and jealous

3. All the snow came down – work was canceled two days – worked from home on Friday

4. Decided not to get rid of Rich

5. Told my mother what was happening as to the house thoughts … she had nothing to add

7. Been sewing on the scrap quilt

8. Got in some purchases through JoAnn’s including learning to use the design board

9. Maury found a new townhouse to rent and he moved AND is considering new school for the kids

10. Our mother went through a minor surgery and seems to be doing well

11. Finally got to a Dr. Marvin appointment – still working through issues with CS and then with the security of a house and thinking toward MN – rode in and out with Rich and got to then eat dinner with him – good conversation as to things going on between us like not getting house or communicating well

12. Bought a new computer with tax money, but now not enough for the second book – ran into Rich problems because of needing to borrow money for this month until receive our tax return

13. Lots of watching of the Egyptian crises with the anti-Mubarak protesters and Anderson Cooper

14. Fallen off the WW bandwagon especially due to a couple days eating out and going up to WI

15. Started Joe and Cari’s quilt again and worked over the weekend on cutting CS quilt for her class

16. Got to spend an extra morning with Linda

17. Got to meet with the girls, went over with group what would be happening as to us getting together in the future and continued it to a pizza dinner with the twins and we received a huge stash of extra fabrics leftover from CS and her upcoming move

20. Was becoming more aware of being behind in the blogging, but not able to get situated just right

21. Started a new quilt with “Moda candy” – about ½ way through with putting together 2 x 2 blocks for top center part of a single bed – placing it on the design board

22. Ordered new supply from JoAnn and Amazon … primarily Fiskar’s scissors and blades, iron-cutting board, and rulers for the front part of the house and 3 regular bed size quilt stuffings

23. Continued one of our present staples in analyzing stuff with Linda

25. Talked to CS about coming up to MN on Amtrak and that Linda might like to join us – found schedules and costs

27. Ok, shouldn’t have known that … spent $100 on three more containers for CS stash

28. Feeling so glad for the sake of notes we’ve been keeping up with Linda

29. Received another note from people from our online sewing group – Unearthing Quiltability … wondering how to get that back to the schedule, but then writing an outline like this seemed to be one of those priorities that allowed it to happen

30. Remembered CS and Linda’s birthday, but forgot about the birthdays of Isa and Joe … wondering about my family instincts :)

Oh my gosh … it’s going to take a bit of time trying to analyze all of what’s happened. I think I’m going back and numbering the items, then maybe later when there is more time we’ll be able to discuss some stuff. I know that I have to take my medicine and it’s time to do our homework - maybe then just one half hour more and we should be then on our way.

There … we did a little more. We updated our Facebook page to include a few pictures. We hadn’t put the cake up with Linda and CS birthday weekend and we hadn’t put up the new “Moda Candies” quilt. It’s zipping right along. I’d like to really get it to the point that I could start and finish at least one quick quilt every month or two. We got some of the extra batting after we saw how quick this was going. Ok, ok mentioned that already. Fighting the impulse to want to write and write, but we’ve got commitments at work too.

Having such a good life! 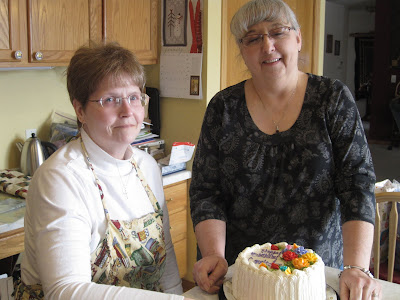 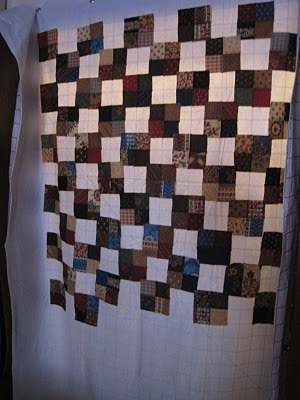