Good morning … this is me. We’re up to about 9:30 A.M. on Sunday morning. All the normal things have been done. We’ve written to Linda, taken our shower and medicine and had a light breakfast. We also watched Sunday morning with Rich. So that about takes us up to now. We’ve been checking on a few things as to the new quilting guild so that is pretty exciting. Linda has shown an interest. Now that I’m looking at the differences between muk-muk and Downer’s Grover, I’m really liking Downers Grove better because of all the extra programs and meetings they have. It is nice too that it is close enough to have meetings that I could go to. The next meeting is Wednesday, March 23 @ 7:30 P.M.

It seems there are advantages to Muk-muk too. I really love their newsletter and if Linda or the twins joined, I would too just to get in on the occasional event I can go to. I like the idea of options, but especially I like the idea of doing things with the girls. WooHOO!!!

Hmm, Rich is on the phone with Bob and they are having a really good idea. Bob apparently wanted to go out for breakfast, but Rich said he already ate and he had things to be doing, but they’ve been having the longest conversation and they are just laughing to beat the band. It’s pretty cool. Love to hear him having a good time.

I have to think seriously about what we’re going to be doing next. Those guys they are so funny … Rich just repeated the conversation he was having with Bob … it had something to do with food menu items for their next trip. Guys … they are just the funniest people!

Ok, so where are we going to go next. It’s 15 minutes later and I have no real plan although I know I would like to write for a while, just not sure about what. I think we pretty much got general news caught up yesterday.

I’d like to think we think of something between work and quilting, just not sure where else to go with that. I’d like to stay away from the CS conversations, because we seem to have gotten those thoughts to slow down a bit. I’m not so sure where we are with the house.

I guess the simplest plan is that we talked to Rich about doing what we were planning to do with the house as to savings. He said that he put in the box my $250, but he’s only put in half of his money – he put in $500 instead of $1000. This isn’t going to be a good idea. I don’t know where to go with that. Just have to be patient I suppose. I know that he’s got those thoughts in mind. I don’t know what to do with the thoughts as to how were saving as to safety deposit box. I think we’re going to have to talk to the bank as far as reassuring me that money that Rich and I save is just for the two of us and if anything happened to him it would come to me and not be in an argument with his son trying to get the money.

Maybe it is a couple simple statements and those thoughts would be calmed down. Just have to get that set of thoughts in order. We did talk about if something were to happen to one of us or the other, that the remaining person would get whatever was in the account. That be a good deal.

Rich busted us on a couple of expenses we’d paid for with the DSPs and goals. I’m thinking that was pretty much a spontaneous decision that won’t play out in the long run, but maybe it will. Just spent too much money … $200 went into the project for something that is work related and not me centered. I do like to think that I’m coming up with new systems when I do things like this and for that you can’t really ask sister to sponsor because we don’t know the outcomes. I know that she’s tight on money and we’re already in trouble with not asking her before spending.

It’s a mute issue in that we did replace our keyboard at work and she isn’t being asked any longer to cover the cost. She wanted to say that the old keyboard was sufficient, but it wasn’t checked out … Mr. O. just figured what the problem was. By that time we were already looking forward to the sweet touch of the Logitech keyboard, so we put the other away without looking twice at it. If I were ever to leave, I would replace their keyboard and take mine home.

We’re not looking toward that any time soon.

Maybe something we could do if we had extra time today is to look over the new CARF book, I would like to take up some kind of strategy with it. I’m thinking that we are going to be putting the whole CARF program on the computer. We figure there is a lot more that will be done because of the scanner. That’s really a sweet deal. I love the potential.

We’ve – meaning sister has already paid $162 for the book. I’m debating whether or not to just take the binding off the book we’ve already purchased and then sent it through the scanner. We’ve already paid the high cost of the scanner might as well make use of it … and especially because it will print over to a Word document without any trouble. We’d be cutting it down too to just the areas that we are concerned with which should help the overload as well. It just means I’m going to discombobulate a perfectly good book with a nice spiral edge. I think the ultimate thing is to get it to it’s most readable format. It would be too much to copy from the copier and then run it through … because we’d have to copy and turn one page at a time.

Maybe I will do that in a bit – run things through to see where they are and if entering from the outline will help … I’m thinking of the person who was in last time who said that it be best to put everything on the computer. We now have the capability of doing that. Be a shame not to try. And, this isn’t the final book we’d be using … it be a good chance to try it out before the official book comes out. I think the next survey will be April/May of 2013. We’ve got some time, but I really want to incorporate our agency around the plan without making mind boggling switches when we get to the deadline period. It’s a thought, Right?

I’m not sure if you all heard yet, but we finished, finished the 2nd scrap quilt and we’ve renamed it … It is now our Oatmeal and Berries Quilt AHA!

Wonderful! We also had an epiphany in that Rich said that it was his Mother’s and Bud anniversary and then the next thought was why not give it to them? I have been very happy with that thought ever since. 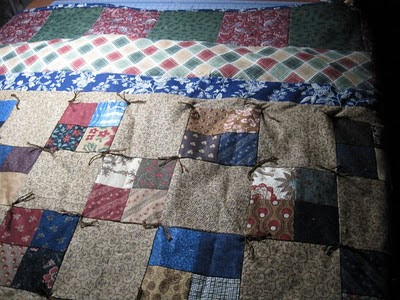 This is the way it looked finished. I would put in some of the other pictures, but we’re going to have to retry taking some before sending off … the bigger pictures were blurred. Hmm, Thinking here about what we’d talked to Linda about as to having a Quilting Journal … that be a nice Sunday project! Hmm, we’ll have to give that some serious thought. I think we could do something by going back over the pictures from Facebook. I don’t think there is much in there we haven’t photographed.

That be like a nice Sunday project, right? Thinking of seeing Linda shaking her head in an affirmation. Hehehe Thanks!

We wouldn’t have a full description of all the pieces that we want to collect information on, and I’m thinking that we’ll want to include projects that we’re working on in part like doing things on EQ7 and with cutting especially for CS.

Oh no … Rich just got a message from his daughter, that she saw a message from Katie a cousin that Bud is in the hospital. I don’t know what that is about, but could be a game changer … Rich is trying to get ahold of someone to confirm. We’re suggesting that he call Karen his step-sister.

He didn’t get anyone at his folks place. Ok … maybe not … he’s talking to Katie’s mom and someone else is in the hospital … ok, got the story … it is Katie’s other grandfather on her Dad’s side. It’s not a good story for him. He’s in the hospital getting his leg amputated through diabetes.

That’s sad for the family, but I’m glad that Bud’s ok. Now Rich is just having a casual conversation with his daughter. We’re going to need taking down the adrenaline level. *sigh*

Too bad for Katie’s other Grandpa though. Our prayers go out.

Ok, shhh shhh … where were we? Not wanting to appear here unsympathetic, but that part isn’t really any part of my life … have to concentrate on where we are.

Ok, back to the quilt journal. Let me take a look at that project for a second and we’ll see how it goes.

I’m thinking in some ways this is a duplication of Facebook and the Blog, but it’s different too in that it’s targeted just for the quilting. I like that some stats are going to be kept and that there should be a summary paragraph as to my feelings over the project. I’m not sure how that all is going to happen, but our journey with quilting happened just about the same time that we started taking pictures on line.
Posted by Ann Marie at 10:39 PM