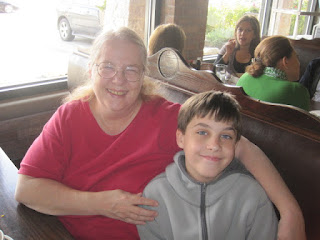 Good afternoon!  It’s us!  AS you MIGHT have noticed our WONDERFUL Grandson is pictured here with us.  We are soooooo honored to have spent this time with him.  He’s everything his Mom said and more!  We had lunch with him and his Mom for the first time yesterday afternoon and I was soooo excited that I came home told Rich everything (rambled) we could remember, and then literally we pulled in Chief (one of our two kitties) and put ourselves in a sleep situation for an hour or two.  It was just a far out place mentally to go because of its awesomeness!

I’ve always felt I loved Austin, but now we have been introduced as a much older child who we can relate to as long as he would like us to be involved in his life.  He is just SOOOOO terrific!  I won’t go into too many details, because we want to save his privacy, but from our point of view we were incredibly amazed with his brightness, his care and concerns for others, his ability to articulate what is one his mind, how curious and honest his questions are, and how easy it is to fall for him!  He’s just unbelievable he is so magnificent.  This is not to say that my other four Grandchildren (all girls) are any less, but to meet one for the first time … you just have to know we’re going to be bowled over.

We brought him just one gift which was a picture of his Dad around our Grandson’s age.  Both he and Laura thought the two looked so much like each other, Austin didn’t look at it for long, maybe that will come later, but his term for it was “crazy.”  *Giggling* we were so happy to have given it to him.  I forgot to tell Laura though that there may or may not be some other pictures of Thom in back of it.  I didn’t take the back of the frame off, but that WOULD be a nice surprise if we had indeed left pictures in the frame.  We feel strongly that each of the boys receive the pictures we’ve saved and that they should go to their families and be continuously passed down.  That is what we felt like yesterday that we’d passed Thom to his son – our view of him we’ve held onto for so long.  I have no doubt that we will get other pictures back to replace those gone.  And, that’s the way life should turn.

There were so many topics that Austin could ask or discuss that the visit was just way over general enjoyment.  He asked questions about computers, politics, our book, some of the people or parts in the book, our views on punishment and a whole lot more … I’ve never been with a person who could ask more questions than him.  We have to be careful with grabbing up attribution, because I know the relationship between he and his mother and closer family members are more responsible for him than anything, but I was so pleased to - to find that he liked to read, write, and had a very inquisitive mind like ours.  We teased about his statement on being smarter than his Mom and he blushed because he knew at this point it might be bad manners, but then we had to laugh and tell him that his Dad had told me the same thing that he was smarter than us.  We teased back later in life when we found our IQ to prove to Thom that although it was probably that he was smarter, that we weren’t unintelligent either.  I think Austin could appreciate that.  Not only did he ask a phenomenal series of questions, you could see him pondering the answer and then regenerating his thoughts.

I also loved that he could follow his own thoughts and emotions.  For example his mother stated that at first he wasn’t talking as much as normal, and he responded by saying he might be a little nervous.  That was a perfect thing to say showing foresight and allowed us to admit that we were a little nervous too.  I could remember thinking that I hoped I was answering his questions in a manner that was fair and understandable and hoping that he would never stop asking questions.  I think that’s one of the more profound facts of being intelligent is being investigative of other people and things.  Curious Inquisitiveness shows interest in others and in one’s world.  It’s one of our most highly prized attributes.  I think though between us that his interest base is much larger and that he will be able to knit together his understandings of the world in a much productive manner.  We’ve settled in our life to figuring out things very specific to our passion of understanding multiplicity and in dedicating ourselves to learning and teaching about that area of life.  I loved it that I could use a word like passion and he seemed to understand.  We explained it pretty much like having an interest in something so much that work and play got mixed-up.  When we asked what he was most curious about he talked about the atmosphere.  It’s a GREAT interest!

I know I’m never as good at holding back in my blog as I should be, but too I wanted to capture some sense of this first older person view of him.

I think one of the most exciting things was that he was reading our book and understanding things that he was reading.  I fretted that it must be boring, but he didn’t hesitate before saying, no it was interesting.  I think in that one sitting, Austin gave me more feedback than I’d ever received before.  You know that’s going to sparkle us!  When we had started to write that was one of the reasons.  We had felt that even though we weren’t having common relationships with our grandchildren that there would be some kind of legacy passed down to them where they could find out about us much later.  I’m home that one day our other Grandchildren will do the same, but then again it is scary too not knowing how the reading will affect their perception of us.  I’ve already gotten so many good vibes from Austin and I sincerely love the pieces out of the fact that he seems to intuitively want to figure out why things happen especially in people to people relationships.  I had the sense he understood my logic for thinking one thing to another.  And, that interests me a lot.

I can tell also that his mother and her family/friends have probably been asked and answered millions of questions.  I think that really is the biggest take-away … not only that this fabulous person is a part of my family, but how questioning his mind is … at one point we asked if he would want to be a multiple from the information he knew so far and he said it would probably be confusing … I remember a question around there where he asked if we all got along.  LOL NOOOO … we don’t ALWAYS think in a cooperative manner, but we could honestly tell him that communication was better than integration.  He was the one that brought up integration and he seemed well-able to understand that each of the parts in our minds “deserved to be there” and no one wanted to lose their place.  I was SOOOO impressed when one of his first questions was about Gracie and then “Dear Heart” our Annemarie.  I told me the rest of the visit was going to be really something.

Ok, yes I know its 3 pages later and I’m still talking about the meeting, but please know how much ISN’T being talked about.  I do want to say it’s about 1:30 pm and they are expecting within a couple of hours for Hurricane Sandy to hit.  They say EVEN in Chicago that Lake Michigan should have 15 foot waves on Lake Shore Drive.  We just called Rich and talked to him for a minute.  He said that he would be careful with that.  It’s just that he works all around Chicago and Lake Shore Drive is a main avenue between North and Southside’s of Chicago.  He seemed to understand our concern, but also appeared to be pretty busy so we let him go.

We’re listening to Anderson Cooper in the background and feel comforted to hear his voice.  There are 60 million Americans and others who have it so much worse out on the East Coast.  I did leave messages for Thom and Duyen.  We’ll feel better to know they’re ok.  It’s hard to worry about a Marine though – they don’t make them much tougher.  Duyen added pictures this morning on a Halloween party she was at so thinking she’s ok, but everyone has to do the hurricane.  Wouldn’t look forward to being in one.

We’ve talked a little on and off with Linda today.  She’s on the phone now, but still hasn’t signed off … Tpony is going to come home later, so we’ll prepare for that if Linda wants to talk later.  I think we’re probably much more used to Rich being out.

I don’t think much happened yesterday in and around being able to meet Austin.  I’m thinking Rich had breaded pork, beans and rice for dinner and it was very good, but I’m thinking that we ate later like after 6 pm.  He had had my leftover lunch for his lunch and we explained the napping J.  Pretty much then I think we’re really caught up to date.  It was hard to wake me up this morning, which seems to be happening more often.  Maybe that should remind me right now that I’m supposed to take some medicine midday.  Guess we could do that. 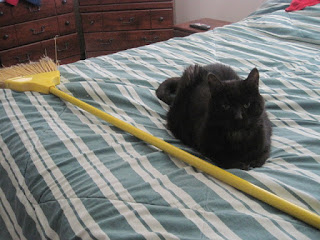 Ok, not saying anything here … but I think it’s a shame when people bring their work home to bed with them.  Ya know?!  Poor Chief we chase him around the house with a camera during Halloween week! 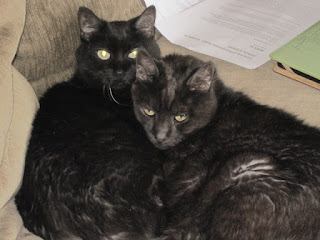