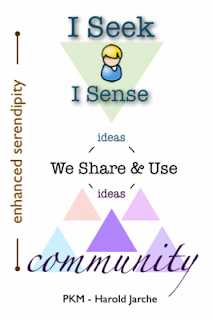 We’ve been up for a while, but have not been overly productive.  We’re just starting to settle down now.  Rich left several hours ago and we’re hoping that he is about there by now and is getting out on the water.  He went back to the lake up in Madison, WI (as we were on Tuesday), but this time he is fishing with Bob.  I think he will be due back in 10-12 hours, so we have that much time to entertain ourselves today.  We DID hear that he left us a $20 to order Chinese.  He said that we’ve been very good this week.  I think it’s REALLY because we didn’t mind him fishing three days, playing cards one night, and then going out to officiate the football game another night.  Yup, yup … I’d say we pretty much understand, and we’ve GOT ONE Happy Rich!

The image up above is from something we found last night.  We had watched about an hour-long video by Harold Jarche (Canada) on PKM which is Personal Knowledge Management.  The above chart is an expression of his idea that individuals seek information to learn, they make sense out of it, and then in some shape or form they distribute or share that information back to the community.  We’ll go into this a little more, but suffice it to say that it felt wonderful hearing about it last night, because it aligned so closely to things that we are trying to do over the last two months with the NEWS blog.  I thought it was very much through serendipity that we found this person and we discovered that he even utilized – and considered it a first step to be utilizing Diigo.  WooHOO!!!  That has got to be my man!  Well, except don’t tell Rich Hehehe.

From Jarche, we found Joyce Seitzinger and through her we found Beth Kanter who states that:
Content curation is the process of sorting through the vast amounts of content on the web and presenting it in a meaningful and organized way around a specific theme.  The work involves sifting, sorting, arranging, and publishing information.  A content curator cherry picks the best content that is important and relevant to share with their community. It isn’t unlike what a museum curator does to produce an exhibition:   They identify the theme, they provide the context, they decide which paintings to hang on the wall, how they should be annotated, and how they should be displayed for the public.