In and out of quilting thoughts ... worrisome session w/Dr. Marvin 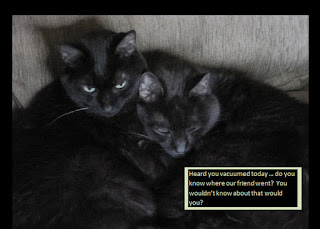 Ok, maybe that is more a comment on the amount of fur growing into a new kitty on the couch and carpet than anything, but it is true … the cats seem to be procreating.  Best to be moving on … we see they are still hiding defensively from the sounds of the loud vacuum.  Must be hard to be a cat … no telling when you might need to run.

Well, things are seeming to slow down a bit and we are happy about that … today was our first real housekeeping day.  We washed and folded clothes and steamed Rich’s shirts and pants too!  That’s a pretty big deal.  We got each room in the house, and straightened and vacuumed.  The dishwasher wasn’t ready to run and we still haven’t fully unpacked the suitcase from the retreat, but that too is soon coming.  The really extra extra deal was that we packed a few things to be mailing.  We got the quilts ready for Mary Ann and we got some sweatshirts and packaged coffee to Jillian and Chris, AND we even took care of the envelope going to Medicaid.  Good deal.  We asked Rich if he could stop by the post office before going to his game tonight.  We’re hoping for the best.  I’d like those things to all hit before Thanksgiving if at all possible.  Just give me a tremendous feeling of having gotten something done this week.  Believe me not much REALLY got taken care of.

Linda and Tpony are home and as busy as ever.  I’m not sure if we’ll be catching up with Linda, because I know she has errands AND she’s going to want to get some sewing done.  She will be celebrating Thanksgiving with family and now with it being less than a week away – there will be more things to be doing.  That’s part of our effort to be doing stuff with our space again.  I would like to make sure as much is as in order as possible because I have to get back in the mode AND Rich is talking about a major cleaning tomorrow where things get dusted and vacuumed underneath stuff.  It’s more than I can do, but will certainly appreciate that he’s willing to contribute.  I think I have about 3 more days straight of laundry to do before we catch-up at a pace of one a day.  Things sure do stack up if you miss a week.

Oh and we took care of litter and garbage!  That has to count for something!

Ok, moving on … We still want to get to Nikki’s quilt today which means that we need to first measure again … I’m thinking it’s like 28 x 28.  Then we add about 3” to each side and cut out the batting and then the backing.  After that, we will pin the quilt to each of the pieces, and then we will do the quilting meandering.  After that, we need to cut the trimmings off and then we need to cut some binding – IF it is not already cut.  I don’t quite remember if we did that or not.  Usually we try to do it as we go, but this quilt was long in coming.  Then we sew together the binding strips, and then sew it onto the front of the quilt, and then lastly we hand stitch the binding to the back of the quilt.  If one just jumped in and did it … it wouldn’t be a very big deal.  We now have four quilts out – two to Linda and two to Mary Ann, so when they all get back, there is going to be a LOT of hand sewing, AND we would like them all finished in December – and especially by Christmas.  I’m feeling pretty good about it.  When we unpacked the sewing area, we set up our hand sewing tools by our space on the couch.  This should be a lot of good sewing while sitting with Rich in the living room.  BUT, we also might have to work on it during the day to make sure they all get done.  The little ones were one thing, but these other quilts are bigger.  It will definitely be the holiday push.

We just checked our sewing room again to make sure things were put away.  We still have a bit of a problem with the closet in that it and the small fridge are being blocked by the coat rack and the walker.  I am probably going to need asking Rich to take it back down to the car.  Most often it is used when we have to be out and walking, or needing to stand in line or something.  It has the chair so we can actually sit down.

Hmm, CS was online … she commented on our FB.  That doesn’t always happen.  Nice!  We’re not sure if she’s back in Rochester yet, or is still in West Bend.  BUT, we did hear that LV Linda got home last night and will be taking her daughter back to Arizona today.  It must not be a long trip, because she said she would be home tonight.  She was gone a LONG time.  We’re figuring her hubby is probably pretty glad to have her back.

Rich is getting ready to go.  He has been having us help him with knee braces and socks because his arthritis is helping.  He needs a certain medication, but needs to go to a doctor to get it.  He made an appointment for Monday, but doesn’t have insurance so is going the budget route.  I feel bad for him.  He’s going to be going one and half hours drive to do two games.  He won’t be home until 10 pm.  He made me dinner ahead of time, but I don’t like the idea he is going to wait until he gets home to eat his dinner.  It is just too long a trip and its not good to eat so late at night.

Another AHA!  CS wrote back and says she’s still in WB and not sure if she’ll make it back to Rochester by Thanksgiving.  Rough spot to be in … Like LV Linda … spouses here are probably hurting?  Another AHA???  Ok, Rich seriously you didn’t think that blueberry bread would wait for dinner if you left, did you?

Hmm, it is now about 2:30 PM and we’re just slowly really realizing that we have about 7-8 hours to entertain ourselves.  We’re caught between that point where we really should be writing something to get back into the computer, and in moving ahead with the sewing.  LV Linda reminded us that we should still keep quilting and I’m pretty sure our Linda says that too.  She didn’t check-in at 2 PM, but I think her schedule going into the Christmas season is tough to compete with.  I remember last year feeling a little hurt feelings, but this year we will be better prepared for her holiday business.  Pretty sure she’s in that mode. J

We also missed a time we could have gotten together with Maury’s family and in particular with Jasmine, because she had a concert last night.  I felt really bad about missing it, but it had been competing with Dr. Marvin time.  I need to plan that out a little better, but because we missed two appointments last week, it was going to be one of those hard things to do.  We will give Jasmine a call in a couple hours after she gets home from school.  I would like to find out how it went for her.  It’s always a bad thing when you miss one of the kids events.

We did have a Dr. Marvin meeting last night.  I think it was more adult than the one before.  There was still a lot to discuss from the weekend retreat with the other quilters.  And, there seems to be a fuzzy line between that and what had happened in growing up with our particular family.  That seemed to be the other half of the meeting.  Some of it was caused because we were working on a project for our mother, but mostly it was similar behavior patterns by some of the stronger women in our life.  It brought back also moments with my Grandfather.  We’re finding there is still very little we remember from him – for whatever reason.  But, finally on the way out the door, it seemed very clear from our conversation and our behaviors leaving or coming into Dr. Marvin’s room had something to do with our Grandfather’s behaviors.  We’re still having trouble maintaining our more normal consciousness when walking past Dr. Marvin.  We talked to Rich about it last night.  He stated that we didn’t have the same reaction walking past him, and we explained that Dr. Marvin – unconsciously for us sometimes takes on the persona of people in our life and through the therapy we can work through those relationships with him rather than the other, and it is a much safer environment to be handling what comes up.