Good morning.  It is about 10:45 am and we’re doing ok this morning, but went a little crazy in our eating patterns – see chart L

We talked to Linda for about an hour and a half 8-9:30 am and then we started our cleaning tasks including getting us into the shower and dressed.  While talking to Linda we updated our chart.  The girls had been here overnight on Saturday, and we didn’t have access to our computer to finish Saturday or Sunday.  We learned how to use the recurring dates I believe, but will take more time to wipe out all the bugs … sometims we get an odd duplicate.  We are finding that if we miss a day, we have to mark the task complete a couple of days, because it advances to the next day and we don’t want to be behind.  There should be a master button to move things ahead that didn’t get checked in a day, but I suppose that wouldn’t get the user to check his days to see when time will clear for the task.  I don’t want to complain because we are liking the system a lot including the part we are doing now where we leave a task for writing for the day.  Makes us feel good to not need a big blog entry, and we’re still thinking of copy/paste these entrys to the blog.  Depends how much is straight cleaning and how much we an note other things and thoughts going on during the day.  It does seem like a good in-between play and real writing.

Rich is now in the kitchen and he’s making his breakfast – thinking its some kind of ham, egg, and cheese sandwich – at least according to the sounds happening in the kitchen.  In about ten minutes we have someone coming over to check the furnace – just general check

AHA!  The heating guy is here.  It is a younger guy, but he seems to know what he’s doing.  He’s quiet though.  I tend to like them when they are more sociable.  We put Dakota’s leash on our chair so he stays out of the way – that’s becoming standard.  We just finished eating too … we had a couple pieces of ham, and then something from Rich’s vegetable tray.  We tried giving Dakota a baby carrot, but he’s not having too much to do about that.  Poor dog much more interested in the ham.  We took a couple of pictures of him – because he didn’t want to come in from the sunroom .. let me get those. 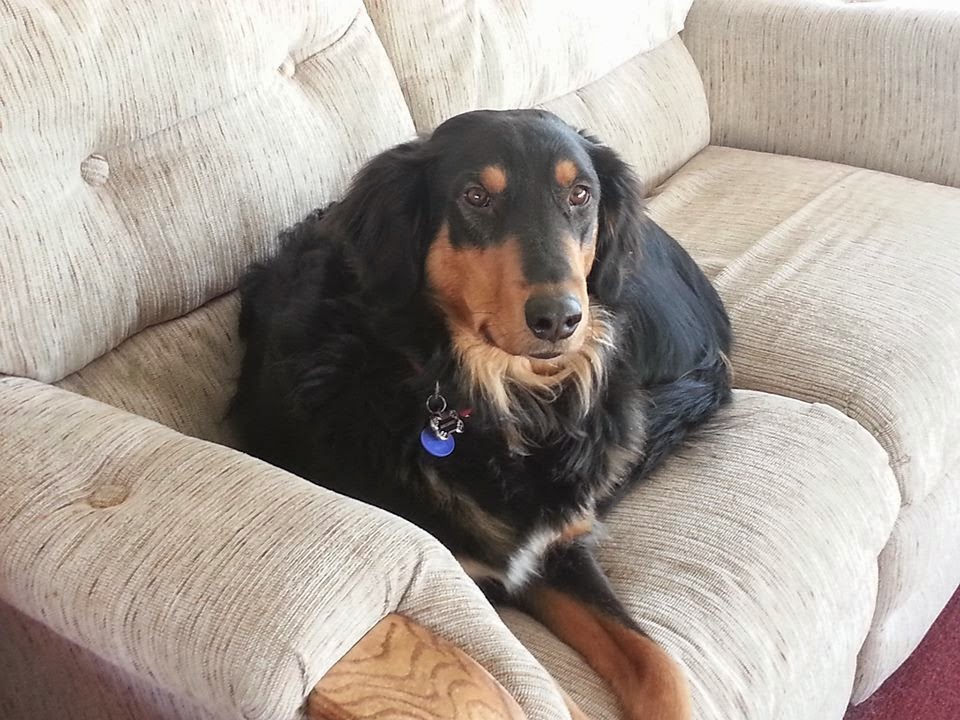 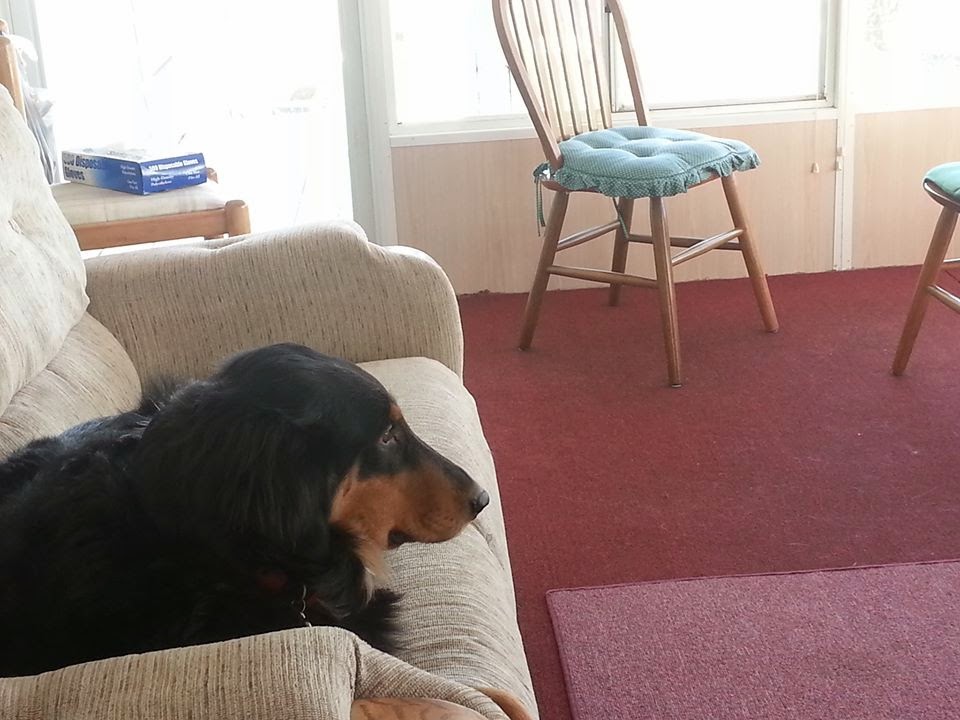 Isn’t he a good looking dog!  He’s so content out there.  Not sure if he’s going to like the heat of the summer temps, but it wouldn’t surprise if he hung around more outside.  We’re going to have to get used to keeping him more out on the porch.  The sunroom is fine, but I think he gets more involved with HIS space if he can be out on the porch.  He seems pretty good at laying up there as to his spot, but will come in if we go out to the sunroom.  We posted these pictures to our site for the place we adopted him from.  I like to keep them updated and I like watching the progress and bonding of some of the other dogs adopted from their place.  This is the place at Gregory, SD.

AND, we have one more picture to show, hold on…. 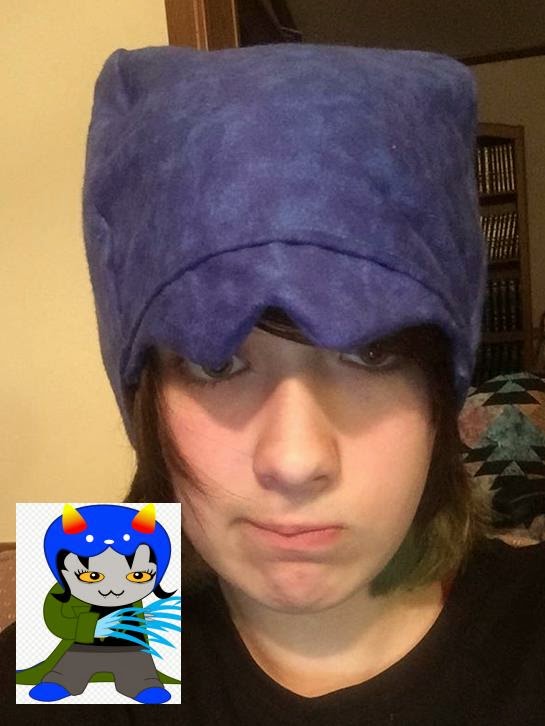 Isn’t this picture adorable?  It is Ame my 13 year old Granddaughter.  Both of the girls did an overnight on Saturday and were here until about 9:30 pm last night (Sunday)  Maury had to work of course on Sunday and although sometimes the girls stay home or have other activities on his weekend, this time WE got to have them.  It was a pure delight.  For the most part the girls just hung around … Isa spent most of her time on the computer – my big one, and Ame spent a good amount of time in the girl’s bedroom.  BUT, after a while on Sunday Rich turned on the fire and Ame came out and sat on his recliner, and then she got the idea to sew this hat.  I LOVE it.  I think the character is called, “Nepeta.”  The project took about 4 hours of pretty concentrated time – mostly after dinner and it was just finished as her dad was coming in the door.  She will finish it with the eyes, nose and she has a good idea how to do the horns.  I don’t know if she will unsew and sew them into the hat, or if she’s going to do a headband.  We’ll see.  The girls were dropped off at their mothers last night.  Word is she got a new sewing machine.  I’m not sure if Ame will be using that or the old one, but anyway it’s a good  deal that her mother is encouraging the sewing too.  Ame showed me the picture of a top and pants she made – it was her first time on the sewing machine and we’re entirely amazed.  The tricky part of the hat was that we had to sew four panels to get it to the right side, and Ame decided that she wanted the inside to be lined with the material that was on the outside.  It’s a really nice finishing touch.  I love how darn cute she is.  She told me about the general picture of what is going on.  She belongs to a group called, “Cosplay.”  Basically, people take ideas from the anime, or other media characters and they sew the costumes, and then get together with others doing the same like at the conventions that Ame is going with her friends.  She’s got a lot of good comments coming back for her doing so much especially as a 13 year old.  I think its very encouraging.  I also think that her mother has a lot of creativity so Ame has good creative genes on both sides.  I reminded her that my grandmother – her great great grandmother was a seamstress.  I love that part of the continuity.  We also talked about maybe in college taking courses in like theatre production.  I don’t know if she wants real work in another field – at one point, she really wanted to do something with the study of wolves, so this might stay as a pastime.  But with her kind of interest, talent and ambition, she’d really have a lot of fun with theatre production making of costumes and maybe scenery.  I hope and will encourage that she joins the drama group in high school.  AHH they have plays twice a year at Main West where she’ll be going.  Maybe she could get a jump at it right away and really learn from some of the older students.  She has that kind of quiet, but assertive personality.  She’s grown a lot this year.

Ok, maybe at this point we’re just going on, but it was pretty gosh darn cool working with her.  She would either have the idea and would pursue it, but this time she was flexible enough to consider our points of view … she always though decided for herself and she did the COMPLETE sewing of the project.  Isa spent again most her time on the computer which is like 6 feet from where we were sewing on the machine, but she was close enough to pick-up anything she wanted, but far enough to focus primarily on the computer.  She does stuff with online Barbie dolls, Club Penquin and watching someone coach/play one of the popular games.  There’s in-between stuff, but she’s REALLY focused.  I know I was supposed to get her moving through other things, but I love to encourage the ability to concentrate..  We did ask her what she learned toward dinner time, but she hadn’t figured that out.  I will like it more when she gets past Barbies, but it seems she’s picking up lessons on relationships.  Let it go gramma!

Rich is gaining as much information as he can from the heating guy – he’s full of a LOT of information … I know Rich likes to learn about the place and that’s a credit to him.  My question?  When the thing stops working, how much is it going to cost – from the sounds of it $2-2,400 for labor and material.  For the time being we have to worry about a $130 coil that is going to soon need replacing.  We’re good to go though.  YAY … guy just left and my question to Rich was – if you are going to vacuum that thing RIGHT before the guy gets here, did you leave TOO much dog fur in the vacuum?  He put it on his will do sooon list.  We’re really impressed because he did things over the weekend like fix the shower curtain, take out garbage, AND screw all the chairs tight as regular maintenance.  I know he isn’t feeling 100% due to most likely his bursitis, so I thought that was valiant effort.

Hmm, about this time though we’re thinking we really have to go face the sewin room.  I don’t like to be in the back when people are here in the front – especially because Rich is further out in the study.  Hmm, another thing though was that we were going to walk the dog.  Maybe it’s a good idea to do that and THEN go to the sewing room for the rest of the day.  It is about 12:30 pm now, so plenty of good time J