Good morning … shoot already a brb  ok, better.  We are getting a late start this morning – it’s already almost 10 am.  We did spend some time with Linda and we spent time with Rich before he left for work.  I don’t think we woke up until about 7:30 am.  Pretty late, I know.  Rich was in the study where we were and he turned on the light and not even that woke us up.  Apparently during the night he covered us with another blanket and we were sleeping Soundly!  We haven’t really done anything on the list this morning.  We did try stepping on the scale several times and kept getting E for error.  We’ll do it again tomorrow when we can stand more stably.  I gave Rich the go ahead on getting the new couch’s today.  Hmm, maybe you didn’t hear any of that.  The last we left it was that Rich was going to Value City to get a chair.  When he got home about 4:30-5 pm, he was asking excitedly if we’d seen the pictures he sent us in email.  No we hadn’t.  Then I started getting scared, because he said he’d been over to Ashley’s and I thought oh my lord he’s trying to replace my couches SERIOUSLY!  Oh man oh man my heart was crumbling.  I’ll give you two pictures – the way it is and the way he wants it. 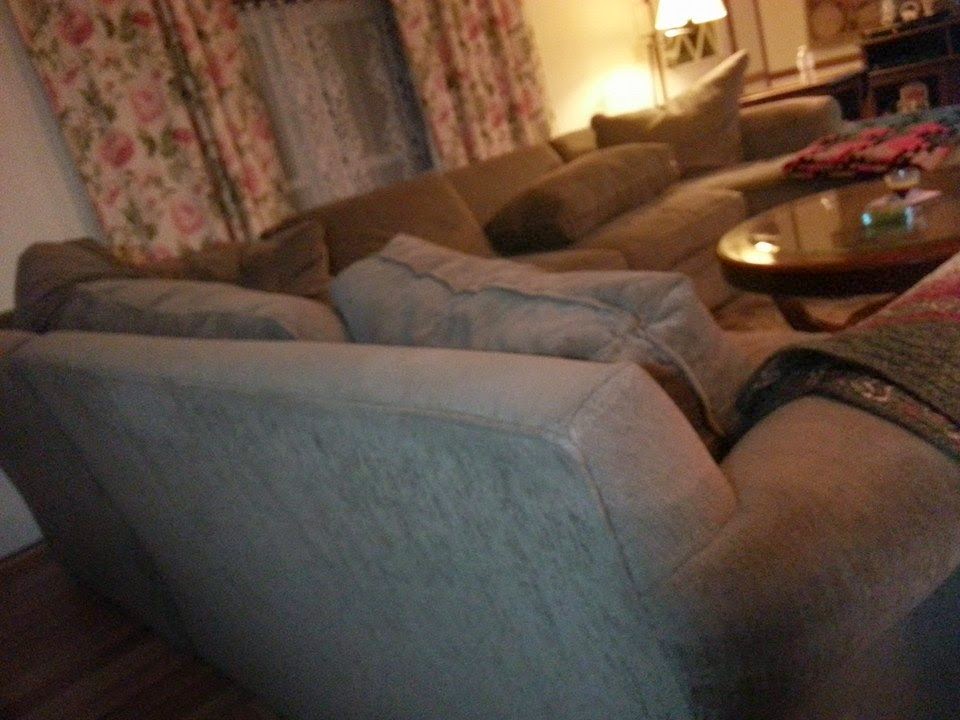 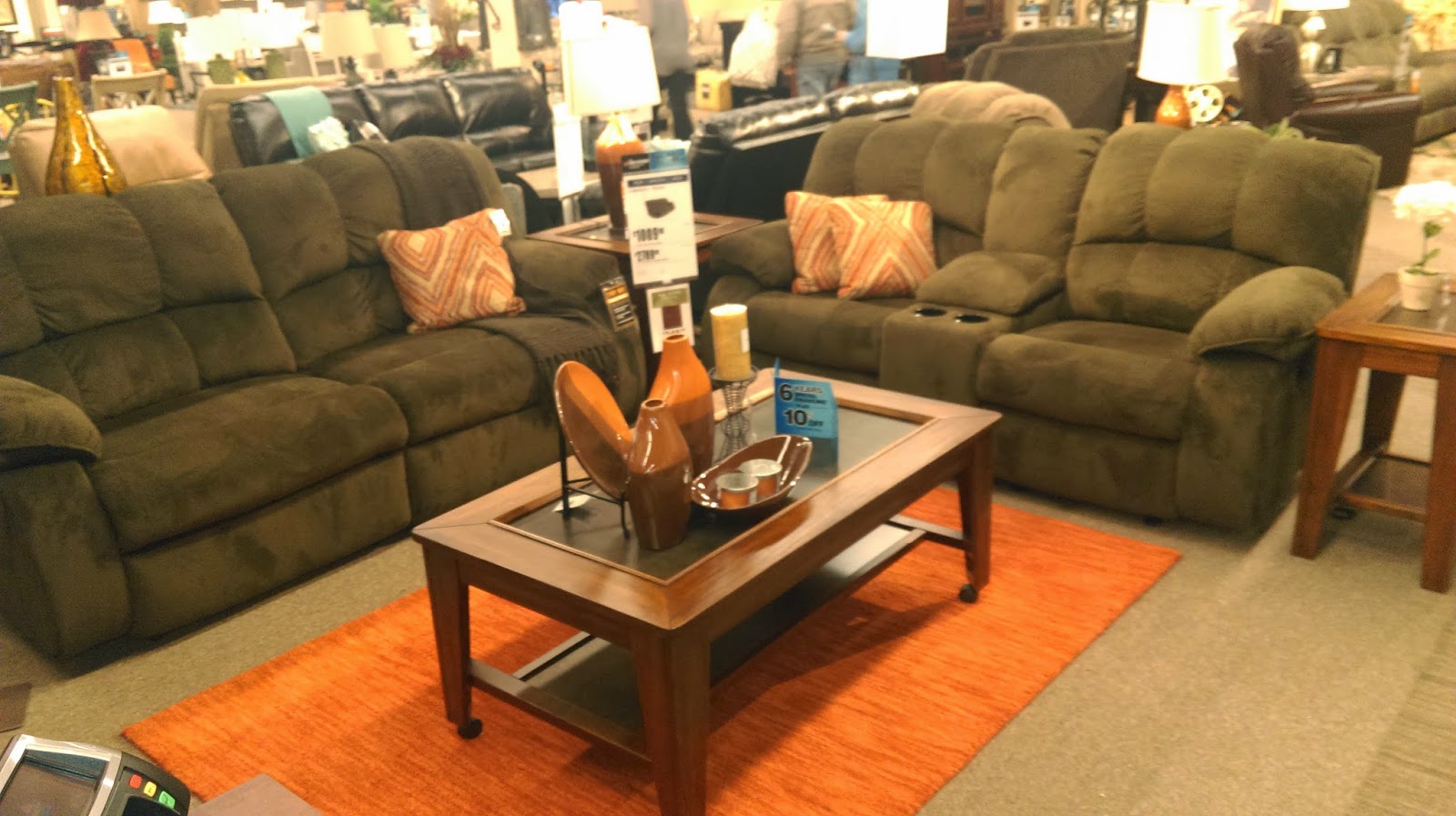 Ok, there is a lot more into the pictures than it reads and I don’t have enough wherewithal to explain it now.  BUT, I like Rich’s new couches, but I LLLLLOOOOVVVEEE MY couches!  The short story is that Rich is going to order the new couch today after he gets off early work, and that the saving part of the plan was that he and I figured that we could KEEP MY couches by placing them in the sunroom with the supposed exercise equipment.  It’s going to be a tight squeeze.  The room is 16 x 12 and they are going to need fitting under the south and west windows.  That means the bike will go on the north wall and the other piece will go on the west wall.  We might be able to save the fridge, but most likely we won’t save the horizontal file.  I could possibly put it under the window in the sunroom, but I think Dakota’s needs to sit by that window are going to win out.  Rich said he doesn’t want it in the garage – and there’s a chance it could end up in the breezeway, but I don’t really want it there.  Also leaving would be the rocking chair and the loveseat out there – which are pretty junky and left behind by the old owners – those will just get trashed.  AND we would probably bring the drafting table into the girls room and the treadle machine will get pushed into a corner in the study.  Chairs we are still figuring out … we’ve got the sewing room, study and Rich’s LR chair to move around, and then we’ll have the 3 chairs from our old kitchen set and the two barstools left from the old owner left.  Some might go to the garage – and we’re thinking one of the kitchen chairs will replace Rich’s old office chair in the guest room so that it will tuck under the table and give more leg room, and then most likely Rich’s old office chair will tuck under the girl’s drafting table which should be good for both of them to be drawing.  I’m happy with that.  Hmm, there’s one more chair with a broken arm – but that matches our kitchen set.  We’ll have to figure that out too, but really only want four chairs at the table.  The 2 recliners in the study are fine as are the 4 barstools in the LR/pass through and one of them in our bedroom for Rich’s clothes.  WOW we have a lot of chairs.  There that was a lot of thinking through.  I’m not sure about all the chairs, but will be happy to let a few go.  Mostly though I like to keep chairs – and we have another think 10 piece set of folding chairs in the garage – Pswhoo!  We were left too 3 stools, but they are being served in the kitchen/or as little table in the study.  We’ll see.  More room for negotiation.  Big thing though!  MY couch STAYS!
What we are missing here is allllll the conversation on the couches last night – possibly up to 4 hours.  It was a lot and a lot of issues came up – especially, being MY couch I purchased with my choices, where this one is going to be RICH’s choice – I will agree with it, but it will be on him because he picked it out, arranged payment and is getting it into the house,  I was very proud – and really excited when we moved my couch into place… it was a whole entire era of me being in charge of myself and not taking hand me downs.  The bottom line I suppose is that Rich is not comfortable sitting on my couch, because it has a soft far back back.  He likes these chairs because they all have recliners, we can hold hands, and they have real backs.  I don’t like another part where it is me sitting with the dog, or me sitting with Rich and that is the only options – as to petting.  I don’t like the style as much – but for that style it is ok.  I’ve liked our modern couch, but again that will be fine in the sunroom with the low windows.  We have a tendency between us to crowd the house.  Rich would like to get rid of more furniture, but we’ve done pretty good with transforming it.  I wish he would get the two girls off the air mattress, but he is sticking to his guns on not spending another penny.  We finally finished paying off the guest room and he wants to keep the payments about the same.  I know he’s been pushing for this change, but we’ve not accepted it all along.  We see more important things to be done.  I’m sure everything will be fine … Just it’s a big transition for me.  Maury bless his heart said he’d take our old couches if we didn’t want them, but I DID want them.  At least he made me feel that someone else appreciated them too.  You know?  We went through the facebook thing too .. It’s going to be ok, right?  Hmm, we deleted the one comment that said she thought her couch with the cup holders was worthy of hate …. I just didn’t want to see that anymore … be brutally honest somewhere else.  Suppose now we should get dressed and get Dakota ready … he has to use the washroom.  He hasn’t been as bothered today by the ear, but he’s StiLL going to get checked!

Good good … got almost everything done necessary before leaving the house.  We still have some work when we get home.  AND, we want to brush the dog a bit before we leave – BUT, he chose to lay on the couch outside.  We’ll still get to him in a minutes.  We want to check his breath while we’re there AND his weight to see if were on target or not for a dog his build. PRETTY SURE … he’s gained weight from the last time, but he’s lost a little now too.  We’re hoping he’s good, but will certainly take advice.  Hmm, better get going want to get there on time!