Poor Dakota.  He doesn’t want the sliding door to be shut.  He would prefer to come and go as he pleases, but it’s still too cool outdoors, 29 degrees, to have that room open to the indoors.  I know if he’s sitting in front of the door staring at me when I look over then he wants to come in, but otherwise he’s been watching out all three sides of the window, especially from the vantage point of the couch.  He’s a smart dog.  Know a good set of windows when he sees it.  I don’t necessarily want an outdoor dog, but if he’s telling me that’s where he wants to be, seems we’ve got to bend to his needs a little bit.  I’m the one that wants her dog at beck and call.  Calm down us … calm down!  I’ve kinda got an ambition of going in the study with my computer and reading from our book for a while, and what would happen if we by chance fell asleep?  We would make sure our dog was in, but the point is, it’s a SUNDAY … so having some down relaxation time seems to be in order.  I like our odds there.  I don’t think there’s much to tell now.  We were pleased with the tasks accomplished and finally spent some time with Chrometa and cleaned things up a bit.  You can look at it summarized by a month (since we’re on to the second week) and then we have a better representation of our facts and figures.  We haven’t gotten it to come out exactly til 24 hours, but maybe by dividing the time and the way it goes from one day to another – maybe that all is a factor and shouldn’t be excessively important – unless of course it stood real far out … for some reason we got 17 hours of something which might have been an entire evening, nighttime and into the morning, but the other numbers didn’t confirm that theory.  So, we just manually took it down.  It is a question in our head so I’m sure that when we get to that point of needing to know how its working/not working, we will, but for the time being we’re letting it go.  We’ve only got about 3 ½ days into it.  Hmm, maybe that is something we can do too.  We were sent an email or two about things to look up at the program base with tips or videos.  That be a good sit in the recliner thing with a fireplace and dog to do.  Good thinking.  Gotta let go of the floor washing.  At LEAST it’s swept and it seems to be the rule we bring in a tremendous amount of dirt each day and hair by the amounts that we’re throwing away.  Just ridiculously large!  It DOES keep us motivated.  Hmm, that’s another job – I think we have to empty the regular vacumm.  I’ll want to measure the waste in comparison now that most days are getting swept.  I’m thinking if it still sucking up a lot then we have some dirt credibility issues.  We’ll see.  Maybe a job for next week.

I like being back here writing even  without a lot to say.  I’m kinda tired, but look at my product (amount typed) and thinking I haven’t really progressed the day I would like.  I’m very much feeling like we’re blogging again and that I can be marking it off as one of my fun projects.  So that will be a couple of tasks worked on between reading and blogging.  Doesn’t say too much though for my tasks of multiplicity and sewing.  I think if we can get away from Rich and his TV tonight, we might stand a better chance at least sewing.  We’ve got some Ann shows which usually means Dr. Pol, Cesar or the Property Brothers.  Rich hasn’t been gone long enough for me to catch them up.  Maybe we could tie those now to the sewing room – and spend the time between 7 & 9 pm in there.  THAT would be a good idea, right?  I think we’re going to schedule it now.  There we set our first reminder to go off at 6:30 pm.  REMEMBER that is what it is for.  We did forget because we didn’t check back on our list – about taking our 11:30 am medicine.  It was 3 hours late, I think then we are going to put off the 3:30 pm medicine (it’s 3 pm now) until about 4:30 pm.  That will space it out.  I think we are going to put off much of the EXTRA work on spreadsheets for next Sunday … I will have to wrestle Isa for the computer, but Now the important thing is to remember that she needs time to read anyway.  By that time we’ll have a solid week under our belt starting with today (Sunday) as our first day of the week.  Hmm that really works.  We usually start the week with Monday, but it is like trying to get everything booted up, but now we’re having a calm day and everything is really well in place.  This seems like a much better day to start the week.  It’s kind of like a free vacation day to start.  We’ll have to sense our way through this, ok girls?  *Giggle*

We are doing better with weight and water – well pretty much if you can include having 3 cookies for breakfast – the nice part was we did a vegetable tray for snack and then had ONE sandwich for lunch, though we had a big can of soup for afternoon snack.  We did have a can or two of diet coke today, but we’re back to the water.  It tastes feels great coming from the cooler sun room.  Well, lets say we’re so-so with that.  I’m thinking we’re either getting spaghetti or chicken for dinner.  I think our preference is Spaghetti.  We haven’t had it for a long time and it seems like a nice relaxing make it and then sit back and wait for a nice dinner together.  The other day Rich made Chinese for the first time.  I don’t think it was GREAT, but it was good and we ate in front of the fire place.  I would like to try that again maybe today, but if Rich comes home with a new chair I’m sure its going take a lot to get him out of it.  I hope he’s having a good time and gets something he can be happy with for the amount of money he has to spend.  You can do it Rich.  I figured last moment he didn’t need me second guessing him, and we told him we didn’t want to be blamed for “pushing him up to a model” past where he had wanted to go.  This one is ALL on him as it should be – it’s going to be HIS chair.  It was kind of funny before we left he’d measured/folded one of my quilts to figure out size on the floor and what he could go up to.  I said something half in jest about going back to his smaller glider, and he honestly said, he’d like to try something a little more comfortable.  This is a BIG deal for Rich.  For one he’s actually allowing himself to go shop and spend cash, and then the other is that he’s improving his standards.  We did hint pretty strongly at a brown chair and ok’d when he said it might be a lighter shade.  We said that was fine because our SAGE green couches are a soft color too.  Then I made him repeat sage and we said most likely it be a BAD idea of trying to match it and that we should have a little contrast – BUT, as to matching – we have a lot of wood colored furniture and walls in her so that brown would blend in pretty good.

Ahh, we took a picture today of Rich and the area he’s going to try and accommodate … here we go! 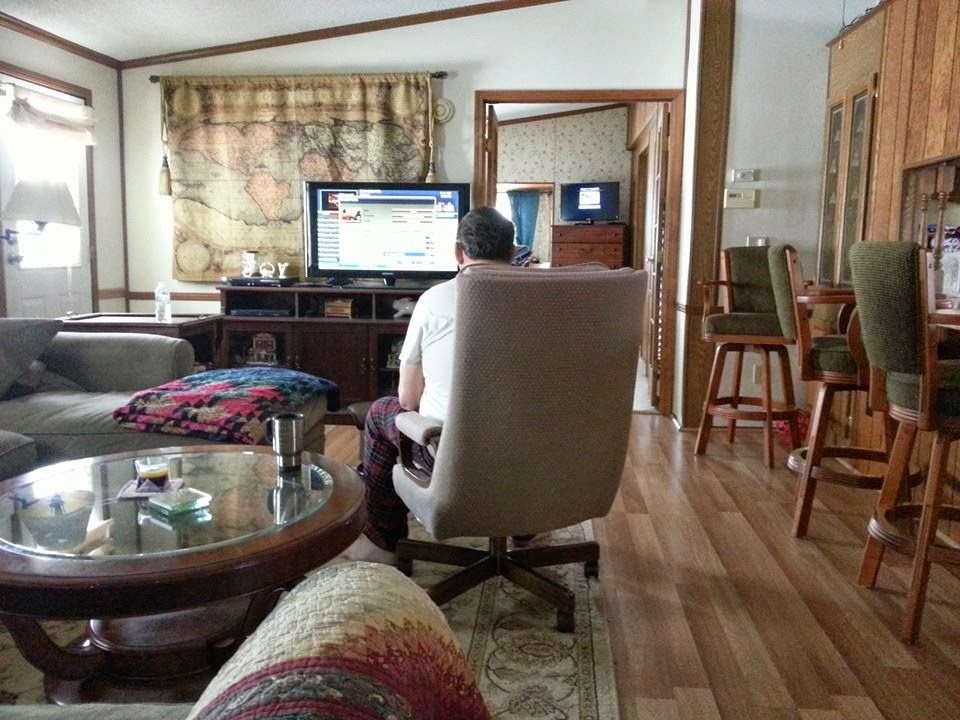 Hehe … as if our LR isn’t crowded enough – Yeeks!  We were the ones though who wanted the barstools up next to the counter facing into the kitchen.  Mostly they are used when we have company, but it really doesn’t allow between that, a gigantic couch AND a very large coffee table for much extra space.  We love it though!  Lots of things that all go toward making someone’s house a home.  For us – I guess wall to wall comfortable seating/laying.  Most often we sit at the lounge end of the couch or laying down in front of the double window to the left of the picture – propped up by movable couch cushions and tucked under the big quilt at the end of the lounge.  It seems then that when Rich and us are in our space – especially at night watching some TV – that it really is a tight little circle which Dakota includes himself with.  Last night he spent about 75 minutes sitting on my lap and us just petting and petting away.  Good deal, right?  Maybe my boy could be encouraged to come in soon.  I suppose then it be time for me to check out my little computer – it’s been recharged, and another fresh bottle of water.  We can do this.  Today we lost our first 5 pounds.  Proud enough to tell Rich SOMETHING about how we were doing.  Mostly its been under wrap because we’re starting so high.  He also liked when we were showing him our programs how we were keeping track of not only weight, but food intake.  He’s a very supportive person and I know he’s doing great.  Think he’s at 18 pounds loss so far in about 3 weeks’ time.  He’s doing VERY good!  YAY RICH!!!
Posted by Ann Marie at 7:06 AM