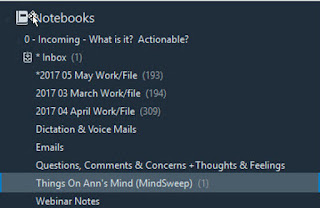 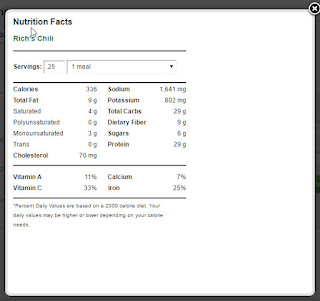 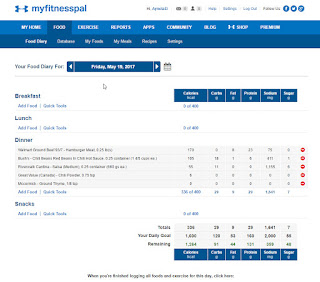 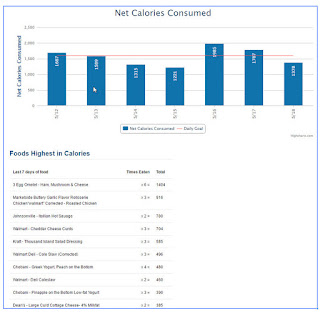 This is just the neatest of things - this chart is one of the neat thing.  There are a couple dozen reports - this one is for Net calories consumed for one week.  The first part of the chart is it gives you a daily bar line WITH the calorie count inside the bar - easier to read, and then the orange line across the screen is the goal - our calorie count is at 1600 calories, so you can read over or under and shoot for goals more easily, and then the chart underneath is the foods highest in calories.  Because we ate our omelet 6 times during the week (God bless Rich), we've totaled out for 1404 total calories of omelets for the week.  It helps in so many ways of watching the numbers.  Wow!  Who would have known we ate FOUR Chobani Peach Yogurt!  Good to know.  Hmm, that's interesting - we've been marking down TWO coleslaws from Walmart - AND the numbers are really different the higher number is only 36 higher in the top number over the bottom, but the top number has 3 servings.  Of course our serving size one each item could be different like .50 cup or .75 cup, but still better try and get one number.

Anyway that's about it for the night.  Getting tired - almost 9 pm.  Rich has been next to me winding line into his reel.  That will help him get get in the water faster.  Hehe - he just had me help.  I had to hold the round thing with new string.  We put a pencil in the hole and he reeled in what he needed.  HEY ... it's time for yogurt!  Where was my head?
Posted by Ann Marie at 9:16 AM