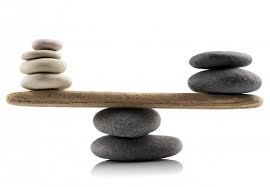 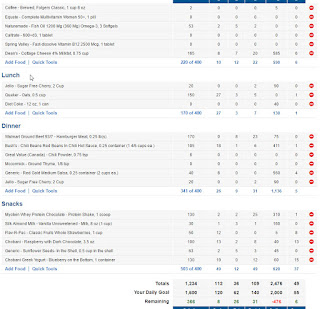 AHA!  Doing well.  It worked yesterday, so we are trying it again this morning.  We wrote out the whole chart of what we’re planning on eating for the day.  AHA!  Forgot what our original intention was – to check fiber.  I think this is where we have to make a default decision.  We are going to use either the Miralax we had been using from Dr. Dorman, or we will use the new fiber gummies – Miralax has 17g a serving and gummies have 3 grams for 2 gummies.  So, we’re going to need to draw a line in the sand – and shoot just for 21 grams which is the norm for my number of calories.  Right now, we’re targeted for 17 grams – so need 4 more, so that means we’ll take three gummies and no Miralax, but if we were down to 8-9 grams of fiber like earlier in the week, we would take half to a full cap of Miralax – trying to hit closely the magic number.  That should make sense all around – and it would be responsible, and then Rich wouldn’t complain because he would think we’re overdoing it.  The end all game is to try and hit 21 or slightly over.  YAY!  We’re being the smart Ann.  Whatever fiber does – and I think we know … we’re going to do it right … and take it off one of the elements that could cause us problems
Next, we have to check sodium.  We had earlier thought this a problem – and it tends to happen when we eat Rich’s chili – although, he got a salsa which is much lower in sodium.  Shoot, we’re still over 475 mg – aiming for 2000.  Let’s see if we can fix that.
Lots of triggers.  First, we started with 585 mg on the cottage cheese.  Can’t do anything about that … it’s eaten.  Jell-O is 90 for lunch and 90 for dinner.  Not ready to give up that, though I could give up the 40mg diet coke, but it would only bring the number down to 545mg.  The Chobani yogurts – could give up one of them – lose blueberry at 60 – ok that’s a start – between the blueberry loss (we had two Chobani’s for the day) AND the diet coke, we lost 100 mg.  What’s next for that other 376 mg?  I could do it by losing the protein shake, but I’m not willing to give that up.  Only other thing would be the dinner.  Rich’s chili is coming in at 1046 mgs.  I have to give up 36% of the chili to come in on time.  Ok, that’s what will have to be done.  I still have the shake, and Jell-O and yogurt.  I think we’ll tide ourselves over … we’re going to make the original cut now.
Shoot … hard number basically, we can have 670 mgs in the chili … think we’ll have to monkey around that number … shoot-shoot!  We’re out of time … we’re going to have to do it with an extra bowl when we’re ready to heat the chili tonight.  We’ll just have to measure it – tare with the second bowl, then weigh out 2/3rds of it.  Seems fair.  BUT, unfortunately, we gotta go … it’s the result of waking-up late, but we want to say it’s ok, because this is just the way our plans adapt – all good and STILL in the shower by 9AM, so we can leave for the gym in 45 min YAY!!!  OH, and the last time up?  We made the Jell-O, packed the gym bag, and did the dishes.  Good Ann’s!  Right on schedule.  We did the whole week good.  The next test, is can we do it with Rich here?  Hmm?  Love to see our fishy guy now in only a couple of days!  BUT, Hey one more thing not to forget – We have to take the walker out of the car after getting the shot, and then about 7PM tonight – we have to water Rich’s garden 😊  Oh-oh there’s the chimes!