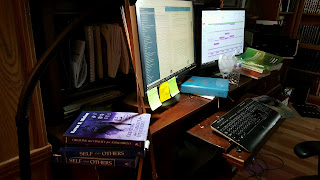 Here are some notes from the phone today:

·         Therapy for self-regulation. DBT https://en.wikipedia.org/wiki/Dialectical_behavior_therapy
·         Look at the books on self-regulation and DID – figure out a time/space for how to add this to the schedule
·         Doing this work/research has re-activated some thoughts about a potential career path in psychology
·         Look up “context” as a concept
Have a good rest of the trip.
-Dr. M